"We don't even take ourselves seriously!"

Dr. Gears is The Odd Bricks’ lead (and only) scientist. Despite his name, which implies that he specializes in engineering, he has shown knowledge in a number of scientific fields, namely computer programing.

Dr. Gears wears a silver visor, which covers a large portion of his upper face. The visor is seemingly opaque and his eye color cannot be seen. He has short brown hair and wears a blue jumpsuit with the letters “ADU” printed on it.

Dr. Gears is often the voice of reason among the team, often attempting to offset Lord Vice’s poor leadership. He is not very open or friendly to the team and often prefers to be on his own to work. He has a quick wit and sometimes insults Lord Vice or others with sarcastic remarks.

Dr. Gears joined the Odd Bricks along with Uekibachi, Noface, and Mega Pig when the team was first formed.

Two weeks after joining the team, he revealed that he had been working on creating A.C.E. (though he did not explain what it was. He simply showed them the machine). However, when he attempted to turn it on, it didn’t work.

After the incident at the bank, he returned to The Evil Lab and continued working on A.C.E. After some additional work, he finally turned the machine on and revealed A.C.E. to the rest of the team.

When Punk Kid and Skipper attempted to infiltrate the lab, he attempted to stop them by sending out two combat drones, which quickly failed. He did very little else to fight against Punk Kid, claiming that he had already been reduced to a useless comic relief.

Some time later, A.C.E. detected a temporal anomaly, speculating that someone or something had travelled through time. Dr. Gears volunteered to investigate since he was the team's only science officer. However, for no explained reason, Lord Vice insisted that he take Mega Pig with him as well. 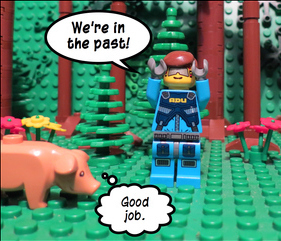 He and Mega Pig exited the vehicle and he started scanning for the source of the disturbance. Gears realized that they were standing directly inside of the anomaly and they were suddenly enveloped in a bright light which sent both of them back in time. Dr. Gears woke up and slowly figured out what had happened.

Soon after Dr. Gears figured out he was in the past, he was attacked by a mysterious, undead Knight. After a brief struggle, the knight seemed to be ready to kill him when he was suddenly saved by an equally unexplained female knight with long red hair. She finally defeated the undead knight by slicing him into three segments.

After the dark knight was defeated, she ordered Dr. Gears to follow her to Borderwatch where they could discuss what happened. When they arrived, Dr. Gears expressed that the didn't know what was going on and she promised to help him in exchange for learning how he got there.

Dr. Gears explained how he came to be in the past (off screen) to Sir Cassidy, the knight who saved him. In exchange, she told him what she knew about The Master. She also told him the tale of Sir McGuffin, explaining that McGuffin's sword, which contained The Master's lost power, was lost.

Sir Cassidy left Dr. Gears, saying she had no more need to accompany him. Although Gears attempted to convince her to stay, she had no interest in him. Shortly after she left, the undead knight returned to Borderwatch with a company of hostile soldiers.

Both Gears and Mega Pig panicked. Dr. Gears managed to escape by ripping a hole into the background and running through. He managed to evade three pursuing soldiers when they fell into a plot hole, but Mega Pig was captured by the undead knight.

Once he was alone, Gears wandered through the dense forest, talking to himself, before Markus tracked him down and told him he needed to meet with Sir Cassidy again. Although he originally wanted nothing to do with it, Markus convinced him to come with a promise of food. He was brought to a camp site where Sir Cassidy tried to warn him about a possible attack on Borderwatch, not knowing that it had already happened.