Out of The Pan

Out of The Pan is the fourth chapter of The Odd Bricks, not counting the Introduction. It starts on page #111 and ends on page #139, making it one of the shortest chapters. It's mainly a "setting up" chapter with little action compared to the previous two chapters. It's also relatively short, much like Sinister Plots. The previous chapter is Time Travel Madness. The next chapter is called The Odd Bricksmas, but it was only a five page non-cannon Christmas special. The story continues in chapter six: Into The Fire.

The chapter opened with a news report from BCN News reporting on the details of Henry Clay Frick's arrest. Brad Burkley was cited denying that the bank robbery had any connection to organized crime, despite the fact that he actually knew it did. 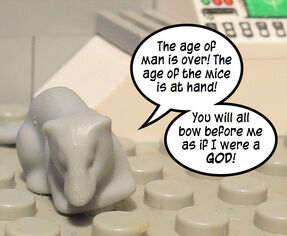 The next scene started with Lord Vice and Uekibachi arguing over whether they should keep Miss Squeaks as a pet. Hana and A.C.E. were both understandably concerned after finding out that Miss Squeaks had been exposed to radiation poison. The mouse soon became aggressive and jumped out of Vice's hands before revealing that she could talk.

She declared that she was going to start a rodent rebellion and they would "bow before her as if she were a god." However, she had no escape strategy, and had to slip away by distracting The Odd Bricks, saying there was a new episode of Monk at the other side of the lab. 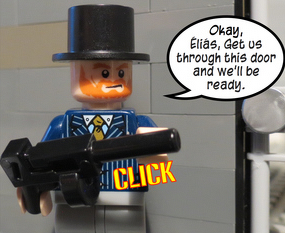 After leaving the lab, Miss Squeaks passed by Andrew C., Elias and Barbel, who were all on their way to infiltrate The Evil Lab. The three arrived just outside of the lab and Elias used a hacking device to give A.C.E. the 'blue screen of death.' Because the door was unlocked, they entered the lab easily.

Andrew briefly explained that they were there to get revenge on The Odd Bricks and Lord Vice responded by calling in three Combat Drones. Once again, the drones were completely ineffectual. Barbel easily destroyed both of them. Expressing that he had little time to deal with them, Andrew and his Austrian comrades held the three Odd Bricks up at gunpoint. 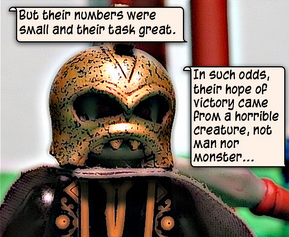 Back in the past, Dr. Gears attempted to figure out how he got there and how he could get back. Sir Cassidy answered what little questions she could by explaining the origins of The Master.

The Master rose up in an ancient war to overthrow The Kingdom of Tropus, but he was thwarted by Sir McGuffin. According to legend, The Master's true power was locked away in McGuffin's sword. She then said that the Master had mysteriously returned, and the disruption in nature may have caused the temporal anomally. Dr. Gears accepted the explanation, saying that he was willing to believe anything. Unfortunately, Sir Cassidy didn't offer any clues as to how they could get back to the present, causing Mega Pig to collapse.