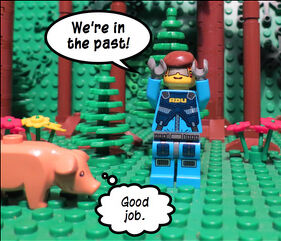 The chapter began with "Guy From a Thousand Years in The Past" (previously seen in Introduction) who was wandering around in a forest alone. Suddenly another unnamed person from the past appeared in front of him and exclaimed that he was from the past.

This was picked up by A.C.E.'s sensors and he warned The Odd Bricks that he had detected a Temporal Anomaly. Dr. Gears volounteered to investigate alone, but Lord Vice insisted that he take Mega Pig with him (for no adiquately explained reason). Vice also provided them with the Vicemobile and insisted that they drive it to the site. Dr. Gears managed to drive to the site where the anomaly occurred, but crashed the Vicemobile into a tree (because it had no brakes).

He and Mega Pig exited the vehicle and he started scanning for the source of the disturbance. Gears realized that they were standing directly inside of the anomaly and they were suddenly enveloped in a bright light which sent both of them back in time.

Meanwhile, when the rest of the team found out what had just happened, Lord Vice decided not to attempt to rescue them, much to Uekibachi's disapproval.

Soon after Dr. Gears figured out he was in the past, he was attacked by a mysterious, black-armored knight. After a brief struggle, the knight seemed to be ready to kill him when he was suddenly saved by an equally unexplained silver armored knight with two swords came to their rescue. The two knights fought until the dark knight was initially defeated when the silver knight stabbed him in the chest. However, the black knight stood back up shortly after and revealed that he was undead by lifting up his helmet to reveal his skeletal exterior.

Meanwhile, Punk Kid and Andrew C. met together in a present day cafe. It was established then that Punk Kid was wearing a mask during his attack on the Evil Lab. Andrew said that he intended to hurt The Odd Bricks, but he didn't know where to find them. In exchange for an undisclosed amount of money, Punk Kid told him everything he knew about them, including the location of The Evil Lab. Before Punk Kid left, he warned that after the Odd Bricks were out of the picture, The Suits would be his next target.

Later, in the Evil Lab, Uekibachi became adamant with Dr. Gears, complaining about his annoying habits and, more importantly, complaining about his decision to abandon Dr. Gears and Mega Pig after they were lost in the temporal anomaly. As a way to "cheer her up," Lord Vice introduced her to Miss Squeaks. A.C.E. and Hana both opposed the new pet when they found out more about her origins.

The focus shifted back on the past for the remainder of the chapter. The undead knight and the silver armored knight were still fighting with Dr. Gears unwilling to help. The silver knight's helmet was knocked off, revealing that the knight was a female with long, red hair. She finally defeated the undead knight by slicing him into three segments.

After the dark knight was defeated, she ordered Dr. Gears to follow her to Borderwatch where they could discuss what happened. When they arrived, Dr. Gears expressed that the didn't know what was going on and she promised to help him in exchange for learning how he got there.